The Batur celebrates Bentley’s iconic W12 engine, with an iteration producing more power and torque than ever before. With Bentley on its Beyond100 journey to become the most sustainable luxury mobility company in the world, the W12 is entering its twilight years – but not before it powers the Batur to being the ultimate Bentley grand tourer. The power of the W12 will be matched by Bentley’s most advanced chassis system ever, bringing exceptional dynamism to match stunning straight-line performance.

The Bentley Mulliner Batur will make its UK debut on 2 September at Hampton Court Palace for the 10th anniversary of the Concours of Elegance. The newest coachbuilt project from Mulliner was first unveiled at Bentley’s Signature Party at Monterey Car Week in California just 11 days ago, and embodies the start of a design revolution for Bentley.

The Batur will be the most powerful Bentley yet, with a 740+ PS version of the iconic, hand-assembled 6.0-litre twin-turbocharged W12 engine that has metaphorically and literally powered Bentley’s success for the last two decades. As the engine enters its twilight years as part of Bentley’s Beyond100 transformation journey to being fully electrified, the Batur forms the first part of a celebration of the W12’s extraordinary power, torque and refinement. 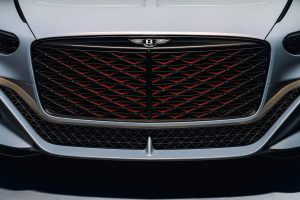 Bentley Mulliner will also be showcasing the Blower Car Zero, the development car for the 1929 4½-Litre supercharged ‘Blower’ Continuation Series, alongside a Continental GTC Mulliner. As Bentley’s in-house bespoke and personal commissioning division, Bentley Mulliner now operates a trio of portfolios to deliver exceptional craftsmanship across the Bentley model range and beyond.

To celebrate the tenth anniversary of the Concours of Elegance, previous winners of the coveted Best in Show crown have been welcomed back. This includes the 1930 Bentley Speed Six ‘Blue Train’ that took home the Best in Show prize in 2013. With its raked coupé body, designed and built by coachbuilder Gurney Nutting, and 6½-litre Le Mans-spec engine, it was capable of nearly 120mph.

The car rose to iconic status and gained its nickname after then Bentley Chairman Woolf Barnato raced the famous Blue Train north through France, following a bet. Despite the absence of autoroutes, Barnato convincingly beat the train, making it to London before the train pulled to a halt at the station in Calais. Barnato covered around 700 miles at a remarkably fast pace, averaging 69 mph on the dusty, uneven roads. He took delivery of a Gurney Nutting coupé shortly after the adventure, and the car became associated with his exploits – becoming known as the ‘Blue Train Bentley’ as a result – despite not being the car in which he completed the race.

Over 50 Bentleys will be judged as part of a specific event for the Bentley Trophy on the last day of the event that will include a 4½ Litre Vanden Plas Open Tourer that was once owned by a founding member of the Bentley Driver’s Club.